"I don’t believe in magic, but I believe in weird shit. I’ve had a weird shit life."
– Rose Walker, The Sandman, by Neil Gaiman

I've been lucky enough to be around lots of cool tech things that happened over the past 30 years. I had a minor role in some of them. Others, I just witnessed as they sprang forth into life. Along the way, I've lived through a few good stories, like the time Apple security asked if I had snuck the just-fired Steve Jobs into the building, or the time I watched a co-worker nearly plunge off the top of a 10-story building during an unusual "company meeting".

I fell in love with cool tech at an early age. I watched 2001 and I wanted to use a HAL 9000 (except for the whole SPOILER ALERT murder part). I saw The Andromeda Strain and I wanted to work at a top secret underground lab like Wildfire. When I was 12 I got access to a computer you could call on the phone and program to say synthesized words. I made it sing "Daisy".

When I was 17 and still in high school, I read an issue of Scientific American that cemented my addiction in two ways: it was all about the future of computing, and it included a 4-page full-color ad for a very unusual computer called an Apple ][. The first page was just this: 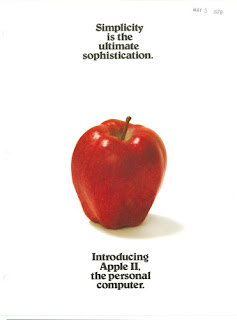 And that was that. Less than 3 years later, after starting my important college years and then quickly quitting because there were no personal computers there, I got a job at Apple. And that's when the stories really started.
Posted by Scott Knaster at 1:56 PM